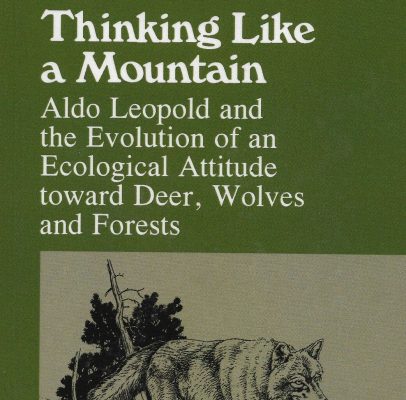 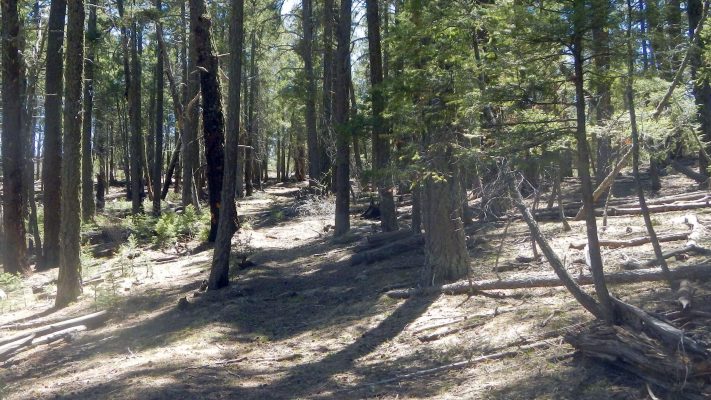 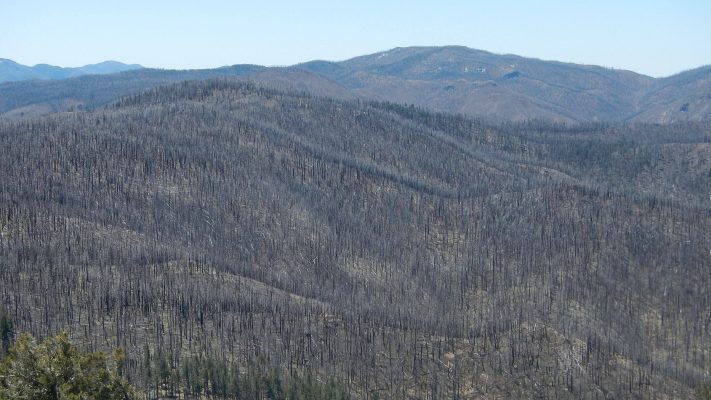 In 1980, Congress took 200,000 acres out of the 55-year-old Gila Wilderness and named it the Aldo Leopold to honor its namesake. Conservationist Aldo Leopold spent his early career years with the Forest Service in New Mexico and persuaded the agency to name the Gila a wilderness in 1924—40 years before the Wilderness Act of 1964.

In 1982, David and I visited Aldo Leopold Wilderness the first time—celebrating our 5th wedding anniversary May 28. From Fort Collins, Colorado, where we were in graduate school, we drove down to Lake Roberts at south end of the wilderness.

We both remember only parts of that epic loop through the Aldo Leopold and Gila. We know we started near Lake Roberts, following the Continental Divide Trail (CDT) towards the crest of the Black Range. We remember little of the gentle trail contouring along high ridges through mixed conifer forests.

I’m sorry we didn’t see more of the Black Range Crest in 1982 because now forest and trail are mostly gone, victim of fires only a few years after our visit. (Fire maps show more than 10 fires in the area after 2000, but a local source told us the east side and some of the crest burned extensively in the 1980s.)

Many Continental Divide thru-hikers skip the Aldo Leopold because it is so dry and badly burned, and hike through the Gila Wilderness instead—which also shortens the route 80 miles. Our late April 2020 trip did only a bit of our epic hike—and most was quite disappointing. More about this later.

In 1982, we were fit 20-somethings and trails were good; two factors that allowed a 150-mile trip in about a week. David thinks we only hiked a day on the ridge, then then dropped down canyons and crossed into the adjacent Gila Wilderness where I recall:

David remembers hiking through the Jerky Mountains, over the crest of the Mogollon Mountains, then hiking a carpet of flattened vegetation/leaves over trail to Mogollon Mountain because snow had just melted, and then descending to hot pinyon-juniper country on Turkey and Miller Spring canyons. We then must have followed Sapillo Creek Trail to the highway. In those days we just used a planimetric Forest Service forest map, so we didn’t actually know what elevations/vegetation to expect until the hike. But we did know that every trail on the map existed and was well-maintained.

I recall feeling overheated on the long road hike back to the campground on far end of Lake Roberts where our truck was parked, mildly annoyed by the many Winnebagos and campers with Texas license plates. Someone gave us a ride the last part. I went directly into my sleeping bag. About midnight I awoke, feeling normal again, and feasted on a starry, starry sky.

I detailed our 7-day April 2020 visit on this website (Wilderness Visits). We started high on the Continental Divide Trail at Rocky Point, 13 miles from Lake Roberts. Big cut-logs indicated chainsaw work to clear trail to the wilderness boundary. After that, clearing not so great. The old trail still contoured long around ridges but was steep and rocky in spots; slopes were denuded of trees and late afternoon wind howled. We camped just below roaring Signboard Saddle, heavily burned; I nestled in by downed logs to protect my finnicky stove from the wind.

CDT from here was rerouted down and up creeks but not well cleared. Back to the Crest at Reed’s Meadow, edged by remnant pine, fir, and spruce; we spent two nights and day hiked trails recently cleared by volunteers. But the CDT northbound was burned and distressing. I was glad to drop down South Fork Diamond Creek to camp in more fire-resistant ponderosa pine, which continued the rest of the way out of the wilderness. We did a short out-and-back on Tom Moore Trail in the Gila Wilderness; an area we may have come through on our 1982 hike. Fire effects here also but much ponderosa pine had survived.

During a rest day near Lake Roberts after this hike, I skimmed a book, Thinking like a Mountain (Flader, 1974 ) that traced Aldo Leopold’s thoughts on ecology from his Forest Service career (in the Southwest in 1909-1924) to later observations in his native Midwest. Below in next two paragraphs, I paraphrase quotes (listed in Flader, 1974) from a chapter (The Virgin Southwest and what the White Man has Done to It) in Leopold’s Southwestern Game Fields (1924)—an unpublished manuscript where the conservationist mused on settlement history and personal observation in New Mexico and Arizona.

White settlers in the late 1800s were met with a continuous sea of grass. Summer grasses (stimulated by summer monsoon rain) like side-oats grama were stirrup high, Leopold reported. Healed fire scars on junipers 500 years old indicated periodic fire that ended 40 years earlier, just after white settlement. Fires set by Indians or by lightning kept the brush thinned out and (aided) grass and trees that…became established in intervals between fires, he noted. With the introduction of hundreds of thousands of cattle and sheep in the 1880s, however, overgrazing rapidly thinned out the grass and the brush, freed of root competition from grass and no longer held in check by periodic fire, began to take the country.

In this same area in 1920s Leopold saw vast brushfields (buckthorn Ceanothus and oak species) that required cowboys to wear leather chaps, and higher up, dense thickets of yellow pine instead of the open grassy stands the explorers had described. By the time brush and pine were dense enough to carry fire, the Forest Service had arrived on the scene with its policy of absolute fire prevention.

Fifty years after Leopold left the Southwest, we observed perhaps a continuing result of these trends of losing much grass in forest from over-grazing. By the late 1980s, fire exclusion possibly aided extensive growth of mixed-conifers in higher elevations and pinyon-juniper in lower elevations, eventually crowding out some of the brush that concerned Leopold. In the higher elevations, the conifer cathedrals offered shady paths with needle cushion hiking and minimal trail maintenance needs.

But in the past three decades (1990 to 2020), more dramatic climatic variation (extensive drought with interludes of intense rain/vegetation growth) seems to have triggered mega-fires too large for federal “fire management” agencies to contain. Most mixed-conifer forest in the Southwest has burned severely, with only remnant groves left. More fire-resistant ponderosa stands (without dense mixed-conifer understory) have also burned but survived better.

Sadly much of the high elevation mixed-conifer burned so completely that New Mexican locust has exploded, creating nearly impenetrable thorny brushfields; we have observed aspen and Gambel oak over-topping this brush after about 20 years, but seems it will be a long time, if ever, that conifer forest returns. Perhaps the New Mexican locust is significantly improving the soil with its symbiotic nitrogen-fixing capability with bacteria, but it’s a relentless trail-clogging menace for hikers. Maybe Leopold’s “brushfields” have returned. We also saw small eroded pedestals of side-oats grama, remnants of the vast grassy fields reported by pioneers.

Conventional forestry wisdom says that that fire suppression and related fuels build up is the main culprit for recent mega-fires. But maybe over-grazing and loss of grasses was the tipping-point for the trajectory that we see in the severely burned Southwestern forests today.

For our 2020 return (that was first planned for fall 2019 but nixed because of a dry fall), we initially hoped to hike the Black Range Crest from south to north but dropped the idea because the 2013 Silver Fire so damaged the trails. We did a small portion from Reeds Peak to Diamond Peak and were happy to leave after that!

Too bad we didn’t hike all of the Black Range Crest in 1982. Now we never will.