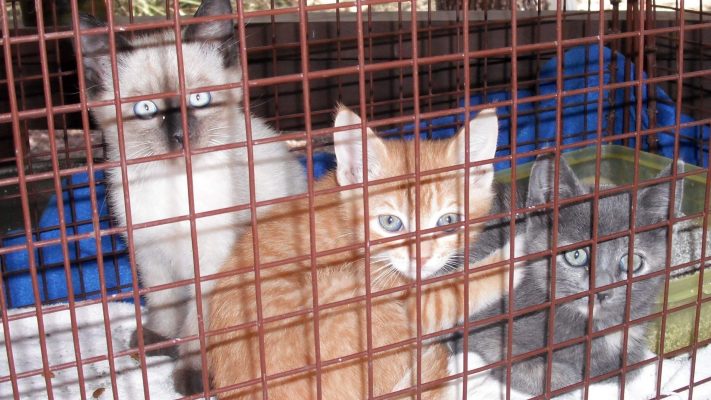 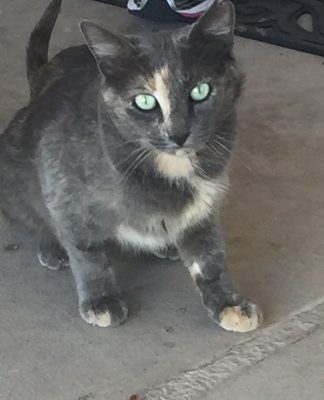 Last May 2019, I posted Wildlife management: predators and prey in the Phoenix suburbs, where my sister and her neighbors shared misadventures of a mallard duck and her family. The female had grown up in my sister’s yard (nice duck habitat with swimming pool and shade). She nested in the next-door neighbor’s yard and laid 13 eggs. Only 1 hatched; a raccoon got most of the eggs and eventually the young duckling. Such is life in the wilds of Phoenix.

“Mama duck” returned this spring with other ducks to enjoy “wild bird seed” my sister put out for them. No nesting, to our relief. Perhaps because we are less duck-tolerant this year. Tired of a duck poop on the deck and in the pool, we now drive away pool visitors with a spray nozzle. It’s mixed signals for the ducks but the pool is swimmable this year.

She showed up on my sister’s back porch; small, frightened, and ravenous. Her loud cries for food indicated she might have been a pet dumped by owners; cats only “talk” to people and feral cats usually don’t. A grey and cream “tortoiseshell” cat with intense green eyes, “Grey Mouse” was welcomed with soothing tones and fed frequently. She happily ate the leavings from the three indoor cats (all rescue cats now thoroughly spoiled), and soon was noted to be pregnant.

After a time, Grey Mouse was arching her little back for brushing and petting from my sis, although she backed off to a corner of the yard if anyone else came near. The two neutered male cats, Six-Paw and Joel, watched the newcomer with benign disinterest but Tabitha, a young female, was incensed at the rival. Several times we broke up hiss and paw fights at the sliding glass door.

One day, Grey Mouse showed up looking much thinner and we suspected there were kittens nearby. The young cat came four to five times a day, clearly starved from nursing. My sister hoped she would bring her kittens over so the brood could be trapped, the young mom spayed and the kittens adopted rather than foisting more unwanted, breeding strays on the unwelcoming world. Several weeks passed, but no kittens showed up.
We wondered if Grey Mouse was raising her brood in the next door neighbor’s yard which has enough native vegetation to be designated a “wildlife sanctuary” and last year attracted the nesting duck.

David and I were gone a week and returned to an amazing story: One evening my sis got a text from the neighbor: “I have two kittens in Havahart (have-a-heart) Traps.” Grey Mouse was captured when she returned for food, and the three felines moved to a dog kennel for transport. Then, a frantic search for a TNR (Trap Neuter Return) group in Phoenix. With the COVID19 scare, everything was closed.

Luckily, a friend in Payson runs a TNR program there, and knew a veterinarian that does spay/neuter without an appointment. The friend also volunteered to socialize and help adopt out the kittens.

Grey Mouse got her operation and the two kittens found homes—the vet adopted the black tom for the “clinic cat,” and his assistant took the second!

On return to Phoenix, my sister and neighbor conferred again, wondering if more kittens were loose. He put out more traps and a wildlife camera; and soon spotted three kittens in the wood pile! He caught them all and brought them over for transport to Payson. But the 5th kitten, runt of the litter, was so small she slipped out of the cage into my sister’s back yard! My sister and neighbor pursued her until midnight, then gave up.

Luckily, the 5th kitten was recaptured the next evening and the camera didn’t record any more. My sister again drove to Payson, dropped off three kittens and returned with Grey Mouse, who was recovering from surgery but remained traumatized at the loss of her family. After a couple days running back and forth between the two yards, crying, she settled down. She could not understand that her children will have a better life than she could give them.

Meanwhile, the 3 siblings have been named Siam Sam, Ginger Tom and Lady Gray; Sam, the most social, “sold himself” to a neighbor who had recently lost her cat by “relaxing in her arms, touching her with his claws sheathed and purring up a storm,” our Payson friend reports. Siam Sam and Lady Gray are going to new homes and our friend may keep Ginger Tom.

I often ponder the relationship of humans and animals; Genesis 2-3 in the Bible reports a time when people named the animals and perhaps spoke with them while the post-Flood story (Genesis 8) shows animals given a fear of humans that we certainly see today. We have not been good stewards of the animal kingdom; domesticating and stupefying them for our convenience, slaughtering thousands for fun, or making pets and then “turning them loose” to fend for themselves when care gets inconvenient. Yet our fascination with National Geographic shows and wildlife photos/films shows a possible longing for something lost.

So I am happy about small volunteer groups who make the world a better place for our animal friends. It seems one small payment of a large debt we owe as negligent stewards of the creation. Our Payson friend’s Rim Country Friends of Ferals (RCFF) is a 501(c)3 non-profit organization doing TNR for feral and community cats in and around Payson, AZ since 2005. RCFF, with three veterinarian clinic partners, has TNR’d more than 3,000 cats including at least 90 percent of several feral cat colonies so that colonies can reduce through natural attrition. Rim Country Friends of Ferals operates on donations and $20 co-pays for each cat. If you’d like to donate to this successful little organization, please send it to Rim Country Friends of Ferals, 8041 W. Stallion Rd. Payson, AZ 85541.

How will Grey Mouse fare here? Infrequent loud yowls in the early morning indicate willingness to defend her territory from feral cats passing through. One early morning she was yowling on top of the roof, perhaps having fled from some predator. My sister would like her to move inside when the temperatures get hotter but that’s a delicate operation with the other cats’ territory involved.

Grey Mouse also seems pleased that birds are fed in this yard. She has dispatched at least two doves and appears to be planning an assault on the ducks.